(sung to the air of  Johnny Jump Up)

I was handed a gift of a group surfing day
"Twill enhance the enjoyment you get from the sea"
As my luck's decided, my class coincided
With  Hurricane Ivan hittin' Liscannor Bay 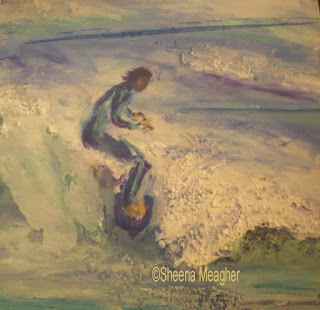 The coach held my board, centred, ready I lay
Now GO FOR IT. PADDLE! Wow! I've caught the wave!
Body glued to the board I surged into the quay
Cruising Hurricane Ivan on Liscannor Bay 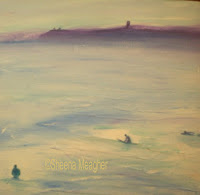 Two long hours later, half drownded,  pale grey
I finally drag my board to the quay!
Sore and exhausted, near dead from the sea.
Darn that Hurricane Ivan in Liscannor Bay

One short week later I'm arais in 'sna tonn
Spied a man holding steady a board for his son
Twelve times he held it til the lad got the knack
And surfed in, erect, Sure I could do that! 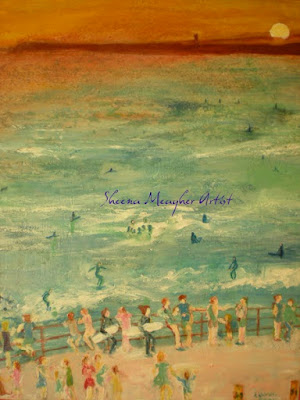 Hanging five, maybe ten, gliding tall and upright
When the board bites the sand, off I'll skip, oh so light
Vitalised, on a high, "Who's that?" they will say
Showing off fancy footwork on Liscannor Bay.

I'll park up in Lahinch, hang out on the Prom
A wetsuit and booties I'll get for a song
Share a chips and a pint at sunset each day
And distill golden moments in Liscannor Bay

p.s; This last painting went missing during a change over in the shop where it was hanging.  I would love to get it back.