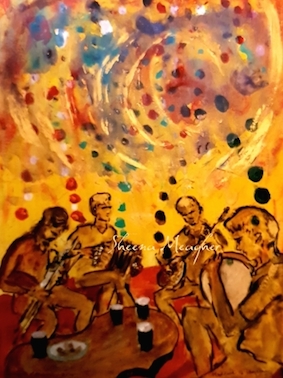 Since 2019 I have been developing the concept of representing on canvas the atmosphere created by musicians, storytellers, poets, dancers and singers.   I contacted Muireann Ni Dhuigneain as I was particularly interested in finding some sacred harp music, and following that conversation she commissioned me to create a painting- leaving the brief wide open.

The painting evolved, a group of musicians emerged, seated around a table shaped like a fiddle.  From the outset the musicians, even the instruments were not the focal point, rather the notes merging and blending.
Once I had the group in place I had the idea of inviting Muireann, a musician herself, to help me bring the painting to life.She visited my studio in Johnstown and Muireann produced a recording of ‘The Gold Ring’ played by Willie Clancy.  The Gold Ring is a seven part jig, much loved by traditional musicians and said to have been channeled from the Other World.Coincidentally I had pre-prepared two smaller canvass, one featuring a fairy and one a harp, to use as a tutorial in mixing and applying Chinese inks.
The theme was set and after lunch we set about the main work.  Muireann instinctively chose colours for each instrument, three for the Uileann piper, indigo for the bodhran ….and played music with finger tips dipped in colour directly on the canvas.

The painting took two more sessions in studio to complete- each one adding another layer of life and meaning to the finished work where I worked on the piece with Muireann looking on, advising.  Two of the musicians took on personalities of actual people.  Full creamy pints appeared on the table.  The notes blended and a sweep of my fingers dipped in gold paint evoked gold rings suspended in the air above the players.  The rings are not so obvious, appearing as light falls on the canvas.

I have always worked closely with clients when commissioned to create a painting.
This was a new experience to invite the client to become part of the actual painting process.
I feel the piece has the qualities we set out to evoke.